Get ready to watch the antihero movie – Venom’s first look! Yes, it’s officially here, the trailer for Venom has been released by Sony.

Sony has officially released the trailer for the Marvel-inspired Spiderverse villain, Venom – An alien symbiote. Sony had already released a footage at San Diego Comic-Con 2018, and now the trailer is here! 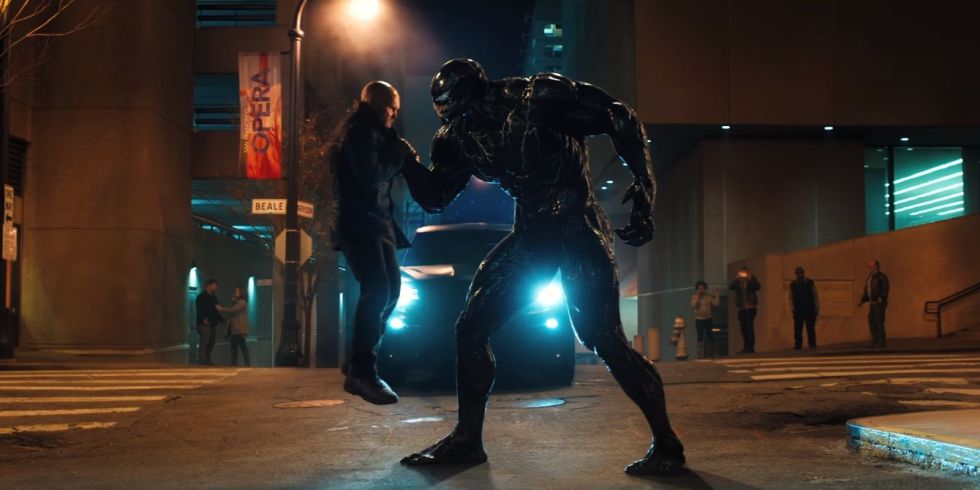 Venom will star Tom Hardy as Eddie Brock, a reporter who becomes bonded with an alien symbiote while investigating the Life Foundation.

Film’s director, Ruben Fleischer told the fans at SDCC that the movie is kept as close as it could be with the comics. “Our movie wants to honour the comics as close as we can tonally”, he said. “In the comics, he bites people’s heads off and eats brains. It would be weird to make a movie with Venom if he wasn’t doing that. We tried to honour it as closely as possible. This is definitely a darker, more violent, more vicious Marvel character than I think anyone’s ever seen before.”

Ruben also revealed in the interview that the movie may set up a foundation for long-standing franchisee – “We’ve definitely laid some groundwork for different directions that the franchise could go but obviously it all hinges on people’s excitement about this film,” Ruben revealed. “I hope people will stay and see what seeds have been planted.”

While the fans were a bit taken aback when Sony revealed that it would be separate from Marvel Studios’ current Spider-Man franchise, but it seems like fans have gradually come around to the film.

Ruben talked about this in the interview and said that the fans would be in for a surprise even if the movie is separate from Spider-Man. “I’m a huge fan of comic book movies so I just tried to pick a lane that was true to the character,” Fleischer explained. “I think inherent to the character, he’s just darker, and we talked about more violent. It’s just totally different from everything else, especially when you’re focusing on just Venom. He’s not a sunshine kind of guy. So, it takes place at night. It’s darker. More menacing. I think that within the spectrum of all these movies, there’s the DC super dark, Zack Snyder type version and then there are the Marvel movies and I like to think that we’re in our own zone apart from that.” He said explaining the character and the movie.

“There’s a symbiote and then there’s Eddie Brock,” Ruben added. “There’s a relationship. That’s what Tom did so amazingly well, was to play these two characters simultaneously. That was, as a director, just exhilarating to watch someone with the capability that he has managed the two characters that he has in his head.”

What do you think about the trailer? Do let us know your views in the comment section below!